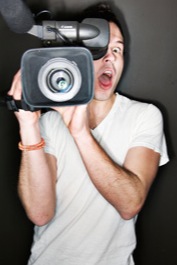 It would appear that Erik Sandoval hasn't picked out any favorite films quite yet.

Erik Sandoval is a writer and director.