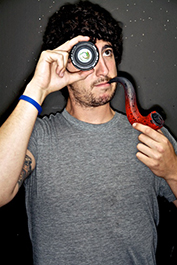 Mike James escaped the cornfields of Indiana for a life of glamour and adventure in Hollywood. He got his big break working at “America’s Funniest Videos”, but his meteoric rise in television was abruptly ended by the cancellation of “The Bonnie Hunt Show”. Unemployment, debt, and one hell of a drinking habit lead him to a bunch of derelict filmmakers known as 5-Second Films. 5SF found Mike starving, naked, and stunningly handsome. They took him in and nursed him back to health. He is now a writer/director plotting to take over the world.