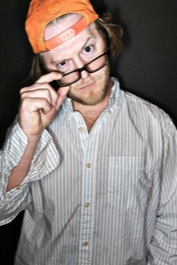 It would appear that Michael Rousselet hasn't picked out any favorite films quite yet.

Michael Rousselet is one of the screenwriters and directors of 5SF’s first feature film “Dude Bro Party Massacre III.” In 2003 Michael saw a movie called The Room, he became manically obsessed with it and told way too many people. He’s very sorry for the damage he has done to cinema and is trying hard to rectify it.