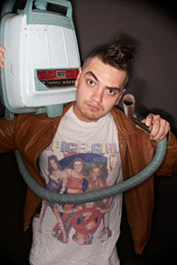 It would appear that Paul Prado hasn't picked out any favorite films quite yet.

Paul Prado wandered onto the set of Rescue 911 in the episode “Peeved Preschooler.” True story. Despite being too young to comprehend such harsh realities, he was encouraged to wander onto another set, which turned out to be an episode of Unsolved Mysteries. At age 5, he was disappointed that neither experiences led him to a chance encounter with William Shatner. LA proved too much for the man so he moved to Hemet, California. Hemet also proved too much for the man so he moved back to LA and attended USC, broke some world records, travelled in the wrong circles, and ended up here. He counts all these to be loss for the excellency of the knowledge of comedy.