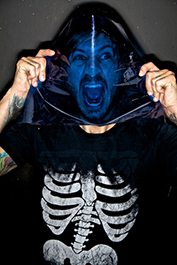 Tomm likes to shoot things. Women, children, puppies. Give him a camera and he will shoot just about anything.