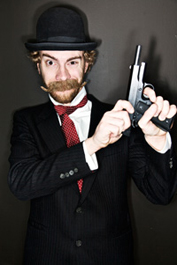 It would appear that Ben Gigli hasn't picked out any favorite films quite yet.

Raised by gypsies in the midst of an historical re-enactment of medieval Krakow, Ben Gigli is 40ft tall and assembled primarily from bamboo and a variety of water-soluble glues. He is a USC graduate with a BA in International Relations and Film as well as a Masters in Communications Management (the Internet). He has worked and consulted for a number web media companies in Los Angeles. He also has co-founded a number of totally unsuccessful web ventures and is currently working on yet another (welcome). He enjoys writing, acting, and long walks on the beach.His ultimate goal in life is to own and successfully ride a solid gold jet-ski.