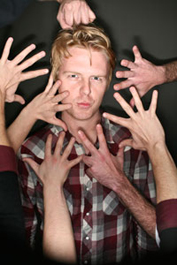 It would appear that Jon Salmon hasn't picked out any favorite films quite yet.

Jon Salmon prefers to hang out behind the camera. Not because of any kind of innate visual talent or fascination with the psychological atmosphere of cinema, but because he’s seriously just Medusa-ugly. He directed the unofficial MGMT video on youtube with 38 million views and typically hides his bizarre joke of a face in the edit bay at 5sf. He’s also kind of a pretty boy and a decent cinematographer.