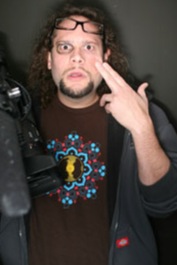 By day he checks focus on celebrities for the E! channel, and by night cleanses his palette shooting, editing, and making shitty FX for this here website. His dog and cat moved into the 5SF house in 2010 and they allow him to stay there while he pays student loans and collects their hair. He yearns to someday make films with substance, depth, and meaning that demands viewing on a screen larger than any Best Buy has in stock.