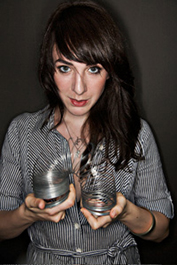 It would appear that Kelsey Gunn hasn't picked out any favorite films quite yet.

Kelsey was born in 1924 to a Vaudeville ingenue and a clown-wrangling father. After discovering the fountain of youth, she attended Washington State University where she graduated with a BA in Theatre and Music. She then proceeded to move to Los Angeles where she has been in several talking movies and fantastical television shows including Castle (ABC), How to be a Gentleman (CBS), Chelsea Lately (E!), and a recurring role on Community (NBC), as well as many independent films and webseries. She is honored to make seconds of film every week and contribute to the lack of attention spans worldwide. You’re welcome.