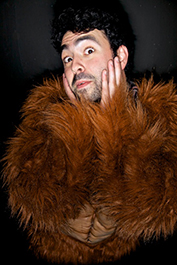 Alec was discovered by 5SF in 2011 when they were in need of an Osama bin Laden, which is upsetting at best. He performs standup comedy around L.A., where he was born for some reason. He acts in things and writes stuff and does a third more humorous and ridiculous thing. He can be followed on Twitter at @alecowen, where he has a special relationship with @SlimJim.