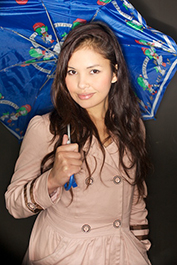 On a stormy day in London, Maria was just a baby in a carriage, resting precariously at the top of a hill. Lightning struck a tree, sending a flaming branch crashing into the handlebars, and subsequently Maria rolled downhill, reaching incredible speeds. Through sheer luck, the carriage narrowly missed 12 cars as it wobbled through a busy intersection, slammed into a curb, and sent Maria flying into American internet comedy. To this day, she won’t do jokes about thunder or lightning.