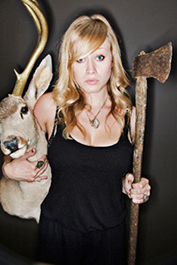 It would appear that Olivia Taylor Dudley hasn't picked out any favorite films quite yet.

Olivia was born at the bottom of the ocean, raised by a family of magical sea ponies and, after spending the first 1,100 years of her life in a world of water, she built a space shuttle (with help from a herd of sea slugs) and blasted into space! Never to look back. After landing on Pluto she decided to join the Prestigious Plutonian Drama Club and soon became the biggest star on the planet! Having conquered this planet she decided to grow wings and fly to the larger planet known as Earth and joined a group of gypsies whose trade of 5-second moving pictures soon became the talk of the town. She is a vegetarian.